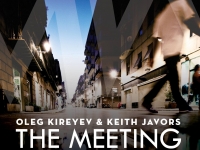 Let us share with you the fragments of Oleg Kireyev's new album "The Meeting!" The official release will take place in the US only on May 31, but already now in this video you may hear a co-creation of outstanding American musicians: Tom Harrell (trumpet), Keith Javors (grand piano), Ben Williams (bass), E.J. Strickland (drums) and Oleg Kireyev (saxophone).

In their second album, the leaders are Oleg Kireyev and Keith Javors. The musicians offer the listener a delightful proof that talented music played by people who heed to each other, overcomes geographical, cultural and even time chasms. Having performed four original compositions and three versions of the standards, Kireyev and Javors, in collaboration with the stars (trumpeter Tom Harrell, bassist Ben Williams and drummer E.J. Strickland) revive the feeling that they could achieve in the first debut album Rhyme and Reason - a feeling of special elation and soft complacency.

Wow! I said, and settled in to listen to a saxophone performer from Russia! Incredibly good and smooth, full of verve, and style, and class, and that is what Russian saxophonist Oleg Kireyev...   Lee Prosser (JazzReview.com®)