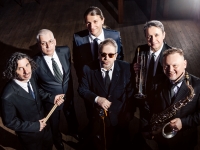 Meet the storied Oleg Kireyev, the jazz musician of a conceptual and refined performance style but understandable to a very different listener, a native of Russia’s Bashkortostan, who is warmly received on the greatest stages in Europe and the Nothern America.

He gigs and releases albums throughout the world. Jazz legends of a planetary scale play along with him while his records are included in the top-charts of American music radio stations.

Oleg Kireyev is a saxophonist who’s off the beaten track. He has been recognized as phenomenon of international scale and a wonder in his home country.

The Downbeat, Jazz Inside, Jazzwise Magazine and other major jazz media of the globe praise Oleg Kireyev. This is no accident!

“He enables throat singing and intricate ethno-rhythms and swing into a single whole, getting an ideal jazz sample of the 21st century" - this is how his music is characterized by the music historian Scott Yanov, the All Music Guide to Jazz columnist.

In 2018, Oleg Kireyev turned 55. The title of People's Artist of Bashkortostan, the official post of Cultural Advisor to the President of Bashkortostan, and many albums released fall under his achievements. Moreover, there is a feeling that there is still a lot of interesting things to come!

Wow! I said, and settled in to listen to a saxophone performer from Russia! Incredibly good and smooth, full of verve, and style, and class, and that is what Russian saxophonist Oleg Kireyev...   Lee Prosser (JazzReview.com®)