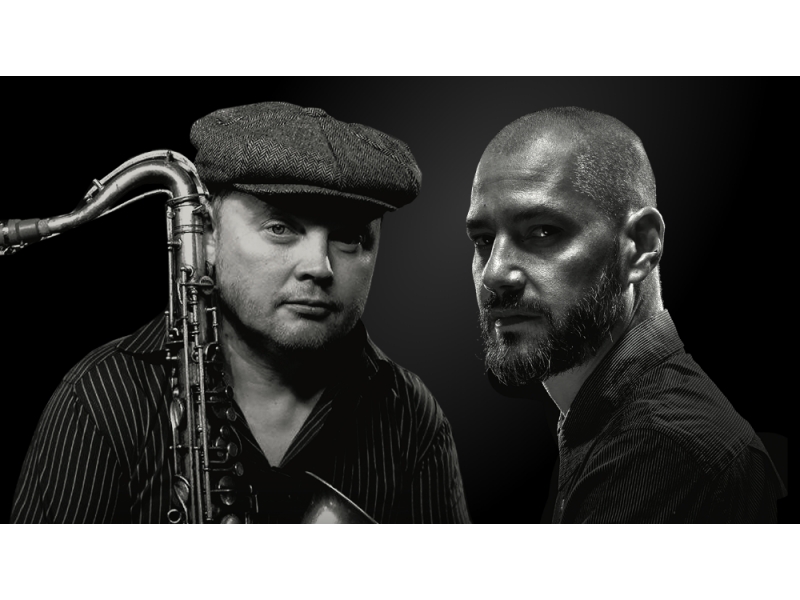 The musicians will perform jazz works a unique treatment, imbued with Russian and Serbian traditional sound.
The idea of the project is based on the works of Vasil Hadzhimanov and Oleg Kireev. This is a completely new reading of the best author works of the modern Balkan and Russian jazz scenes. Vasil will bring new colors and Balkan rhythm to the works of Oleg Kireev, and Kireev, for his part, will present Khadzhimanov’s author’s music in a multilateral and charismatic way. More folk flavor in classic jazz.

For the Russian premiere of the program, Vasil and Oleg selected their favorite author works, which most expressively demonstrate their skill and talent.

Russian jazz and Balkan fusion - this is how you can briefly describe the general direction of the program, which the musicians will present not only to jazz lovers, but also to all fans of meaningful music.

Oleg Kireev and Vasil Khadzhimanov began their cooperation in 2017. They began to explore together the connection of traditional music and popular songs, and the result of this work was the project of Russian-Serbian jazz.

Oleg Kireev has been known in the jazz world since 1984. He is considered the pioneer of ethno-jazz in the USSR and in Russia. Since the nineties of the last century, has performed at numerous international festivals. In 1996, at the Montreux Jazz Festival, he was awarded the diploma “For Outstanding Performance”. In 1997, at the famous Birmingham Jazz Festival in the UK, he was named the revolutionary Russian musician. In 2016 his album with titan of American jazz, trumpeter Tom Harell was included in the ranking of the top 100 best jazz albums of the year.
In 2016, his ethno-jazz ensemble "Orlan" Oleg Kireev performed at the festival "Nishvil" in front of several tens of thousands of spectators.

As a child from a family of famous musicians, Vasil Hadzhimanov began studying music at the age of only five. This Serbian musician of world magnitude defended his diploma at Berkeley at the piano department, and began his career while still a student in collaboration with many Western bands. In addition to Kireev, Khadzhimanov worked with such eminent musicians as David Glymore and Chris Chick. This magnificent master is now considered to be the coolest jazz pianist in the Balkans, along with Zoran Zulphikprasic.

Vasil wrote the author's music for several famous films, and recently celebrated 25 years of creative career. In 2018, he was on the first line in the annual ranking of jazz musicians famous critic Arlando de Soitera as the best jazz pianist.

The musician performing looked like a priest of a strange music patronizing God. Through all the night his eyes were shining with that fire of a man who totally devoted himself to the deed beloved   OpenMusic magazine, Russia more